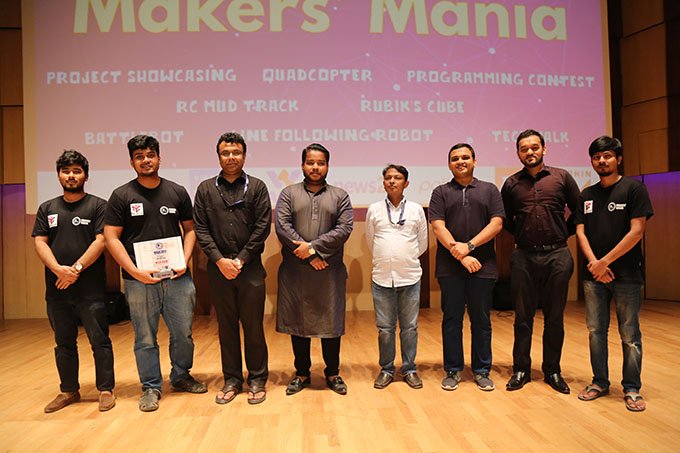 Fab Lab IUB along with IEEE IUB Student Branch organized the biggest tech fest of the year ever held in the country during 22-23 September 2018 at IUB campus in Bashundhara R/A. Over the course of two days and with more than 800 registered participants from schools, colleges and university from all over the country, Makers' Mania featured eight different segments: Line Following Robot, BattleBot, Quad-copter, RC Mud Track Racing, Rubik’s Cube, Project Showcase, Programming Contest, FABLAB Workshop and Tech Talks.
After initial screening of the project summary, a total of 25 registered teams from different colleges and universities were finally selected for project demonstration where around 14 teams finally were present during the project showcase on 23rd September. A 3-member team from the EEE department of IUB led by Mr. Fahim Bhuiyan along with Md. Ahsan-Ul Kabir Shawon and Nazmus Sakib successfully demonstrated their project which was able to attract the attention of a large group of audience. The project title was “Electrooculography (EOG) Controlled Electric Wheelchair”. EOG is a technique for measuring the corneo-retinal standing potential that exists between the front and the back of the human eye. The project aims for those physically challenged people who are suffering from Quadriplegia or Quadriparesis in order for them to be able to control the movement of an in-house built (IUB) custom electric wheel chair using his/her eye movements while sitting in the wheel chair. The whole system was designed, developed and implemented at the lab of EEE Dept. of IUB under the guidance of Prof. Dr. Khosru M Salim, Head of Dept. of EEE and Dr. Md. Kafiul Islam, Asst. Prof., Dept. of EEE, with locally available resources and with relatively much lower cost compared to the commercially available electric wheelchairs. Attractive prizes were awarded to the Champion, First runner up and Second runner up team during the Prize Giving Ceremony held on 23rd September. Team IUB finally grabbed the First Place in Project Showcase among the 10 teams (University Category) with the Prize Money of Taka 10,000.
This mega event was covered by Daily Sun, Shadhin 92.4 FM, and NEWS24 as press, radio, and media partners respectively. In addition, the event was also supported by Project BE as Goodwill partner, Innovation Hub BD and GDG Sonargaon as supporting partners, and Jafran as food partner.