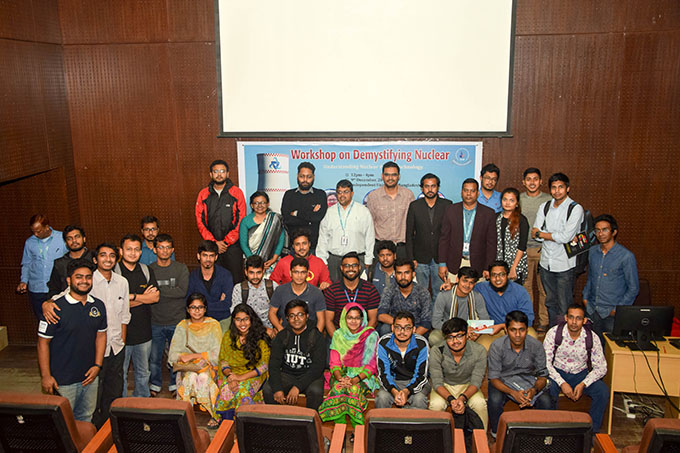 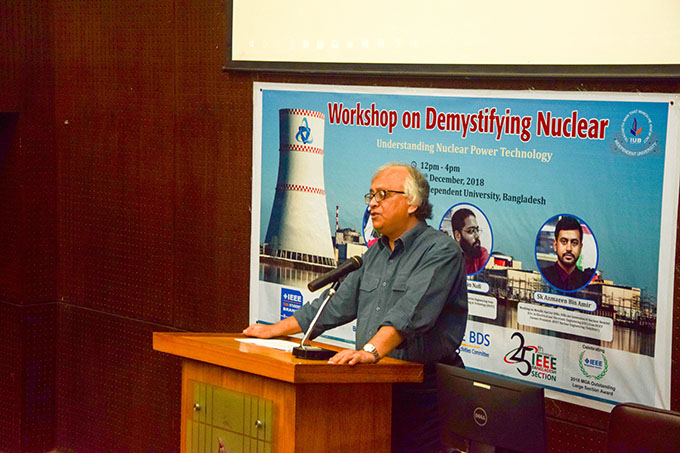 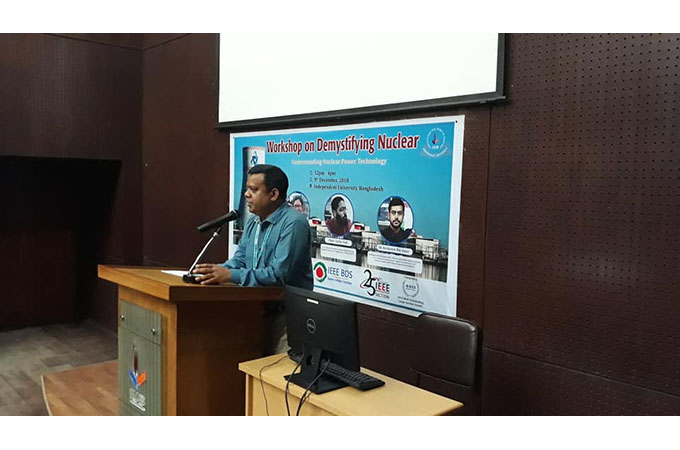 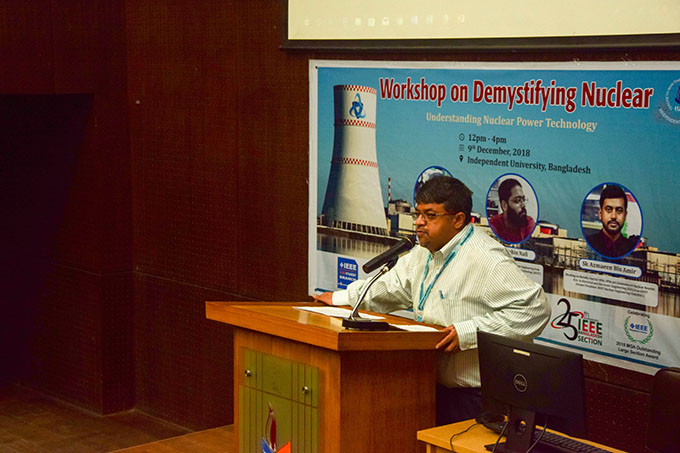 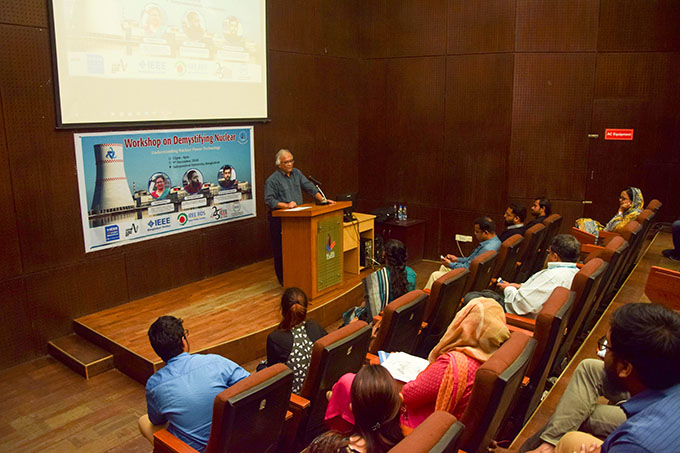 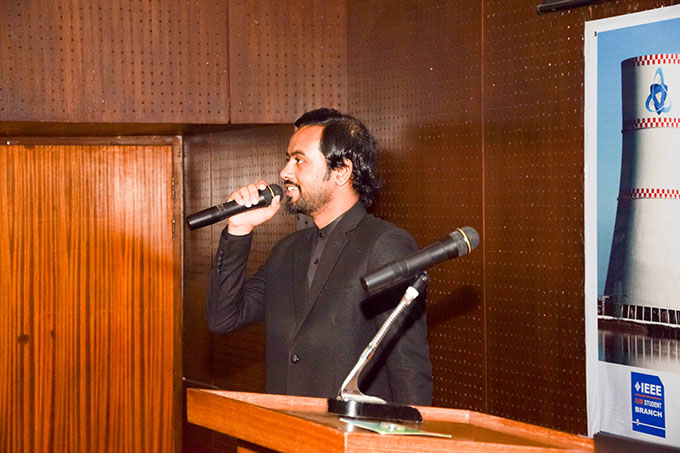 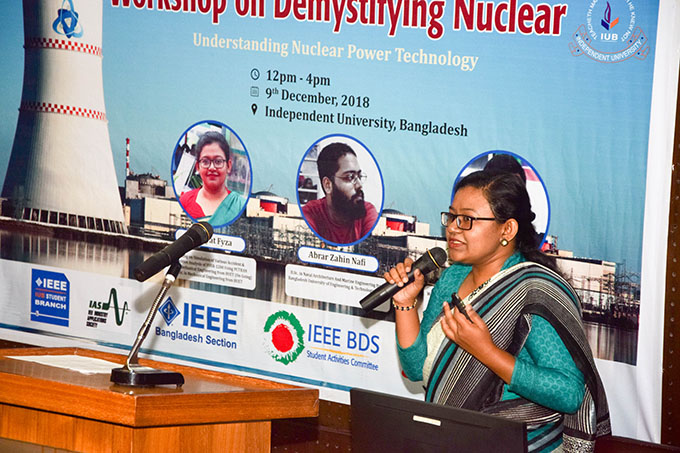 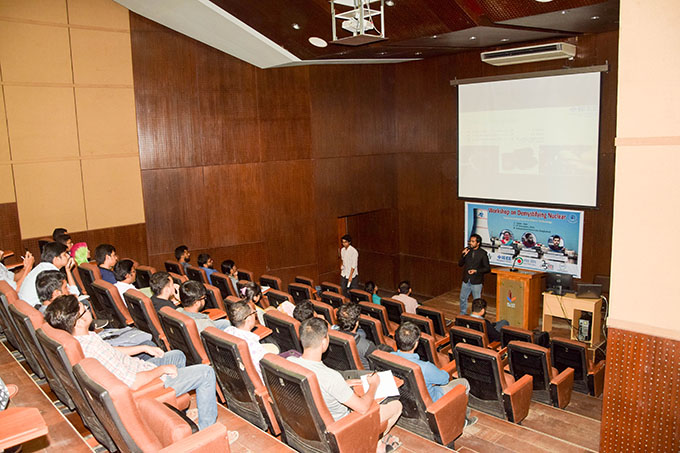 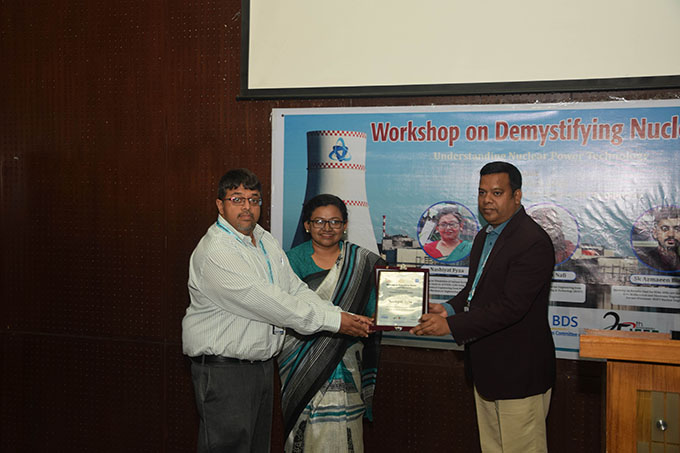 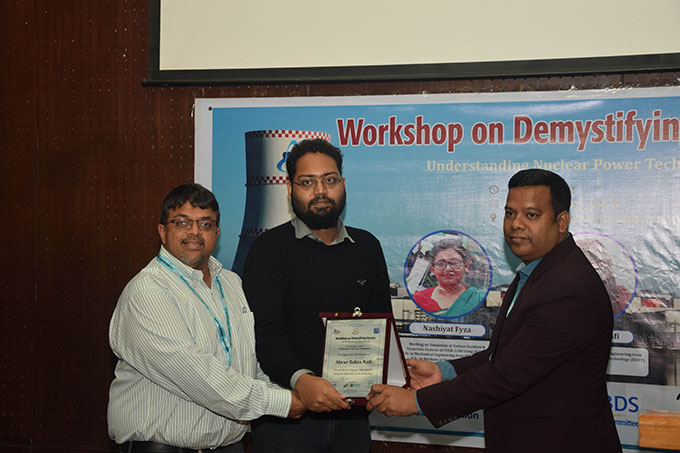 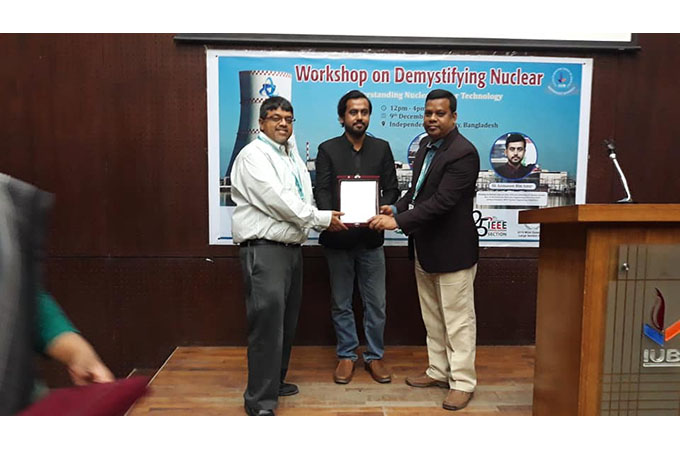 A day long workshop on "Demystifying Nuclear" held on 9th December, 2018 at Independent University, Bangladesh. The workshop was organized jointly by IEEE Bangladesh Section, IEEE Bangladesh Section Student Activities Committee, IEEE IUB Student Branch and IEEE IUB SB Industry Applications Society Chapter. The workshop was inaugurated by Prof. Mohammed Anwer, Dean of School of Engineering and Computer Sciences, IUB. In his speech he mentioned about the importance of nuclear engineering and about the future of nuclear energy in Bangladesh. Later, Dr. M Abdur Razzak, Branch Mentor of IEEE IUB Student Branch and Dr. Mustafa Habib Chowdhury, Branch Counselor of IEEE IUB Student Branch inspired the students to attend these types of workshop and gave their remarks on nuclear power technology. This workshop was patronized and funded by IEEE Foundation. On behalf of that facility the motive was to flourish the idea of safe nuclear activity and future possible opportunity. An approach was made to clear all types of prejudices and misconception against nuclear power and the future potential and opportunities of it. Also the safe generation of power and the possible safety measure were introduced to prevent any kind of casualty in case of failure.
The workshop was divided into four sessions-
1. Importance of Nuclear Energy in Bangladesh.
2. Energy Generation in Atom.
3. Peaceful Application of Nuclear Power
4. Higher Study and Prospective of Nuclear Power Technology.
The sessions were conducted by three instructors. Ms. Nashiyat Fyza who is doing MSc. in Mechanical Engineering from BUET conducted the first session. In her session, she pointed out the energy crisis in Bangladesh and mentioned about the feasible alternatives of energy. The next session was conducted by Mr. SK Azmaeen Bin Amir who has completed his BSc. in EEE from BUET. In the session, he explained the whole process of nuclear fission and fusion and how to harness nuclear energy from uranium. Following that, a quiz session was held where participants had to answer basic questions on nuclear power and technology. The top three winners were given small gifts. After the lunch break, the third session consisted of the various peaceful applications of nuclear power in marine sector, biomedical engineering and other fields as well. This session was conducted by Mr. Abrar Zahin Nafi who completed his BSc in Naval Architecture and Marine Engineering from BUET. The last session, which was quite an important one, was conducted by Mr. Azmaeen where he explained about the prospective of nuclear power technology in job sector and higher study at home and abroad. Mr. Akhlak Bin Aziz, Lecturer, Dept. of Physical Sciences, IUB joined the workshop lately and provided the participants with valuable information on nuclear engineering. In this interactive workshop 43 students from 10 different universities including IUB were attended. The workshop was ended by giving small token of appreciations to the three instructors followed by a group photo.