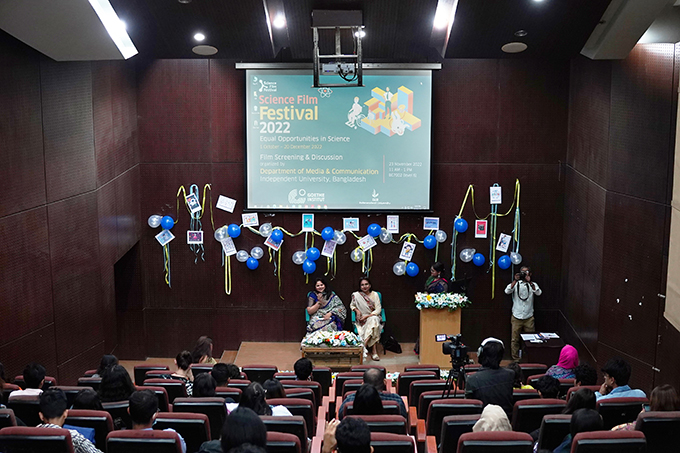 The Department of Media and Communication of Independent University, Bangladesh (IUB) in partnership with the Goethe-Institute Bangladesh hosted a film screening and discussion titled “Science Film Festival 2022” on Tuesday, November 22, 2022 at the university campus.

This year’s theme for the festival is “Equal Opportunities in Science,” which is a response to the continued under-representation of minorities and women in science and aims to highlight the challenges of cultivating an adequately diverse scientific workforce.

The event was inaugurated with the national anthem, followed by a welcome speech by Ms. Raisa Rasheeka, Head (in-Charge), Dept. of Media and Communication. “The government’s Vision 2041 aims to attain a pro-people, pro-planet and sustainable Bangladesh, where no one will be left behind. The Media and Communication Department of IUB has been actively pursuing this goal,” she said.

“Goethe Institute Bangladesh, through this festival, has provided us with the perfect opportunity to create awareness amongst our students regarding diversity and inclusivity through film-viewing,” she added.

Prof. Dr. Taiabur Rahman, Dean of School of Liberal Arts and Social Sciences (SLASS), IUB, said, "Through this event, IUB reiterates its commitment towards strengthening academia and industry relationships. Science enables people to think and act objectively. Therefore, we must rise to the challenges under the representation of women and minorities in the science sector."

He also said, “I hope that this event will contribute to increasing awareness of the issues centering on the issues of diversity and inclusiveness in STEM fields.”

The first film screened was called “Mind the Gap - (No) Interest,” which focused on the gender gap in science and tries to trace where it originates from. The second film, “Patient 4.0,” set in France, showcases how far science has come in the field of public health and the way in which the integration of artificial intelligence is contributing to the progress.

After the screening, a discussion was held with Ms. Mehzad Ghalib, independent film activist, documentary filmmaker and editor, and Ms. Samia Aziz, senior lecturer from the Department of Public Health, IUB. Ms. Refat Ara Jerin, lecturer at the Department of Media and Communication, moderated the program.